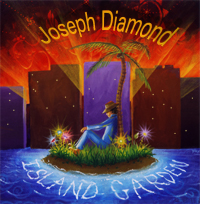 “I just now played “Island Garden” today. These works are capable of standing alone as classics. When I reached ‘Early Autumn,’ I was pleasantly surprised and touched to hear faint, familiar whispers of ‘Broken Heart’ in it…a brief moment of Joseph’s heart softly speaking to us of the real him inside…another great work of master craftsmen.”

Listen to a few samples…

Montoya Mambo
“This was written for my first playing engagement with the band in Wilmington, Delaware. The name Montoya was given to me in Aruba and being that the song has such a dance feel to it, I decided on Montoya Mambo.”

Anytime
“This anthem is for the people of the world who say yes and give of themselves in whatever they do in life.”

Yaqui
“…dedicated to one of my best friends Rudy Romero, who passed away. Rudy was a Yaqui Indian and this song is in honor of his heritage and his infectious personality and playing style.”

Liner Notes
On his previous solo recording, Joseph Diamond described himself to the world in the album’s title as Not Your Typical New Yorker. The airtight Latin-informed jazz on that disc certainly supported his claim; how many New Yorkers do you know who can make a piano sing and groove at the same time, and make you want to listen all night?

What Joseph gets into on Island Garden leads me to suggest that very little is typical about this amazing pianist and composer. For starters, these aren’t your typical Latin tunes. Just about any decent player can create an album of rhythmic, listenable music that appeals to the background jazz set. But Joseph takes a path much less traveled, which results in a much more rewarding experience for you, the listener. Joseph hasn’t just thrown some montunos together and played pretty melodies over them for this disc. He’s written a collection of great compositions: Tunes with direction, rhythmic vitality, humor, harmonic twists and turns, and most importantly, variety. They get more interesting each time you hear them.

It’s rare that a single album will draw from such diverse Latin traditions without sounding contrived. Joseph makes it sound like the real deal because he’s the real deal himself. A fortuitous set of circumstances led him to spend years traveling the Caribbean basin, absorbing the rhythms, phrasing, and sensibilities of dozens of music cultures and traditions as he gigged from island to island. The mambos, merengues, guaguancos, sons, and calypsos underlying the tunes on this album sound as though they’re fresh off the boat. Of course, great tunes aren’t anything without great playing – another area in which Joseph excels. His solos are masterful but not overbearing, inventive without losing their focus. His montunos are monstrous. He’ll tear your head off one moment, then turn around and infect your heart with an unforgettable phrase. He makes you wonder what he’s going to do next.

It doesn’t hurt that he’s brought in a stellar array of colleagues to support him, many of whom are luminaries in their own right in the Latin jazz scene, and who count themselves as members of Joseph’s live band when they’re in town. Bassist Leo Traversa is so deep in the pocket it’s ridiculous, whether he’s playing fretted or fretless electric. Vince Cherico is the heartbeat of the band on drums, with a host of percussionists laying down the perfect parts for each tune. Joseph knows what to do with a great melody, and he’s handed several of his off to players equal to the task, such as Rob Thomas on violin, Eddy Zerveignon and Bruce Williamson on flute, Marshall Sealy on French horn, Adam Niewood on tenor sax, and Guido Gonzalez on flugelhorn. The result is a collection of tunes that are orchestrated to perfection, with just the right voice singing to you at every turn, invigorating, inspiring, and intriguing you. Your biggest challenges will be to sit still while you listen, and to wait to see what Joseph Diamond does next.      Ernie Rideout